In a rare incident in Karnataka's Bandipur Tiger Reserve, an elephant gave birth to twins. Elephants usually have only one baby at a time. The incidence of twins is very rare. It is said to be observed in only one per cent of elephant births. Hence, an amazing video is going viral on social media in which a female elephant can be seen in the park with her two newborn babies. The little elephant twins can be seen struggling to stand on their feet. Their mother is teaching them to walk soon after the birth. 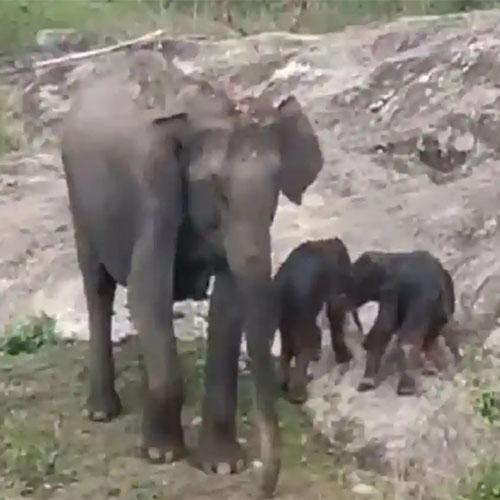 They say that twins are double trouble and of course, soon after their birth, taking the twins to the park becomes a daunting task. The female elephant gave birth to twins in a pit filled with water and by the time the forest officials found out about the birth, they were already drowning in the water. According to the report, forest officials decided to intervene after seeing the twins drown helplessly in the water for nearly an hour. Then two teams were formed. A team took away the female elephant and the other team saved the children.