Cheetahs a new future or a history for India

All living forms on this planet are subject to the fundamental law of extinction, yet the Anthropocene has fuelled the extinction of life at previously unheard-of rates. Since the Industrial Revolution, the rate of species extinction has increased to abnormal levels; under normal conditions, it would have taken 2,000–6,000 years to lose a species. Since the beginning of time, we have lost more than 60% of all known life forms, with conflict, ill-treatment of resources, habitat and climate change, and exploitation for sport and prizes at the core of the persistent causes. Carnivores as a group are substantially more vulnerable to extinction events during the Anthropocene because the members of this incredibly attractive taxon are in direct conflict with human interests. They consume similar foods to what humans do, are interested in our eutherians and pets (even ourselves), and often place a higher value on the dead than the living. They have enormous habitats in which to grow and reproduce. We have purposefully frightened, persecuted, and exterminated entire populations of carnivores from various parts of the world. For example, African wild dogs and Red and Ethiopian wolves now only inhabit 10% of their historical ranges, respectively, and lions, tigers, and cheetahs are absent from nearly 80% of their historical habitats, with native extinctions of many representative populations.

Carnivores have and continue to intensely pique our attention and emotions, despite the fact that this paints a rather bleak picture. Carnivores appear to form the inner circles of our minds in everything from Chauvet (France) and Bhimbetka (India) cave paintings to relics and heirlooms, art and parallels, literature and politics, making them one of the most extensively researched groups. We have learned from "formal" studies, anecdotal evidence, and indigenous knowledge that carnivores are fundamentally necessary for the ecosystems they belong to function in a balanced manner, protecting ecological integrity while also enhancing human well-being by providing essential ecosystem services. 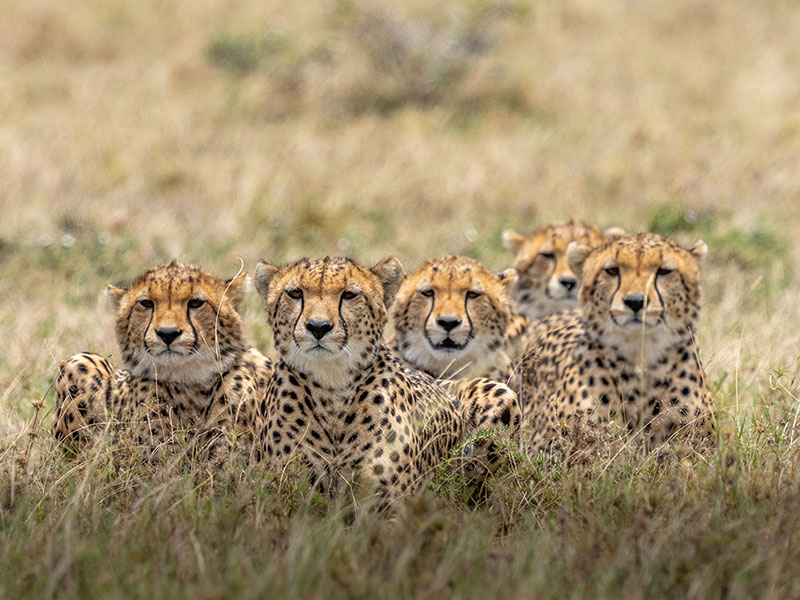 Photo by Ahmed Galal on Unsplash

For a nation with over 1.3 billion people and one of the fastest-growing economies, India has the good fortune to have kept an almost entirely intact carnivore lodge. The primary forces behind this resilience are the social, spiritual, and legal obligations of the Asian nation towards life. The Asiatic big cat, considered to have gone regionally extinct in 1952 as a result of hunting, environment destruction, large capture, and use in shikar entourages, is now one of the world's most beautiful carnivores. The Asiatic cheetahs coevolved with the black buck and chinkara to become one of the top predators of grasslands and open natural ecosystems (ONEs) in Asian countries. Only about 30 wild Asiatic cheetahs still exist today, and their survival is constantly in doubt.

The current "conservation introduction" project to reintroduce the cheetah to India aims to preserve relatively less well-known species-habitat systems, including those in Kuno, Gandhisagar, Jawahar Sagar, Nauradehi, Madhav, and Sitamata in Rajasthan and Madhya Pradesh. It also aims to increase the "charismatic" value of grasslands and savannahs, which have historically been neglected and dubbed It is debated whether to use the notion of "charismatic" species to support conservation, although there is no doubt that public support for particular species significantly aids ecosystem revivals. India is a good example in this regard, where ecosystems have undergone extensive conservation and management, with tigers and lions at the forefront. The habitats of tigers and lions have benefited from tremendous political, economic, and scientific heavy lifting that not only helped them make their magnificent comebacks but also helped build safe havens for a variety of species that are generally less well-known. Additionally, India has mastered the art of restoring charismatic animals like the tiger in regions where they have gone locally extinct when it is necessary. Was it necessary to reintroduce tigers to Sariska or Panna in order to protect the species in India? Most likely not. However, tigers provided the political will that the ecosystems required to advance protection. The region of Kuno, where the introduction of cheetahs is being considered, was previously prepared for the reintroduction of Asiatic lions, a crucial conservation measure to reduce hazards that might befall the only population of lions in Gir. That action, though, has encountered a persistent socio-political impasse. The introduction of cheetahs to Kuno could revive efforts to safeguard the area, which includes 750 square kilometres of protected forests adjacent to approximately 3,000 square kilometres of open habitats home to leopards, chinkara, chital, blackbuck, and chousingha.

The contiguous Kuno landscape has the promise of space and habitat that can support both species, but how it will be realised will rely on the national conservation policy. It can be risky to reintroduce a carnivore into a system where humans share the landscape, but conservation history has shown us that it is possible with the right balance of research and outreach.