The elephant which was rescued from the captivity of a mahout in Uttar Pradesh and later given a shelter is now celebrating 5 years of freedom. 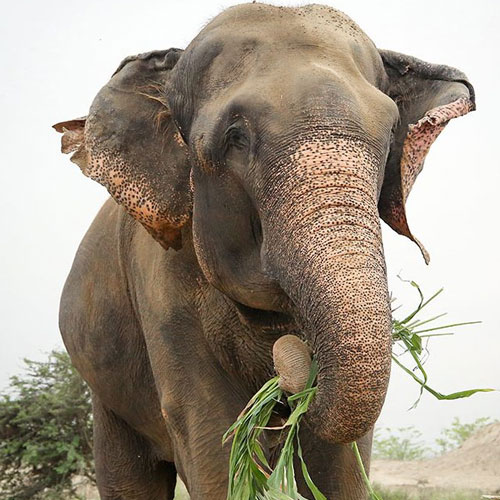 Indian wildlife has flourished over the time after the Independence because there have been many reforms and jurisdiction regarding the conservation of wildlife animals like tigers, blackbuck, cheetah etc. Though, we haven’t come to our senses yet because when we see such horrible incidences occurring in our country, we encounter human cruelty.

The same case came to our attention in Uttar Pradesh, where an Elephant was found in captivity and harassment. It was handled by a Mahout and constantly beaten with the whip and whatever the Mahout could find to make the Elephant stay in line and obedient. The condition of the elephant was coming to worse ends and the malnutrition was making it weak from the inside.

In 2014, NGO Wildlife SOS successfully rescued the Elephant and placed him under the care of Elephant Conservation and Care, Mathura, where he was treated immediately with lots of medication and natural habitat so that he could heal.

Dr Yaduraj Khadpekar, who led the rescue operation of Raju said that “The first time I laid eyes on Raju, I was shocked to see him living in such detrimental conditions. He had spiked chains on his feet that were digging into his flesh, and his body was riddled with scars and painful abscesses.”

“The past five years with Raju have been an incredible journey for all of us. His determination to get better has accelerated his recovery to an extent that nobody was sure, was possible,” CEO Wildlife SOS Kartick Satyanarayan.

This year Raju celebrated his 5th year of freedom and recovering health by having a special cake made for him by the rescue workers. Everybody has become attached to this jolly being and why not, they are the simplest and kind animals on Earth.