Collarwali: The Legacy of Mataram Tigress


The Wildlife community of India witnessed a very dejected day on 15th January 2022. The day, when the most beloved tigress of Pench National Park in Madhya Pradesh took her last breath. She was 16 years old and reigned through the dense forest of Pench with chivalry and valour, vanquishing every other animal in her way. The untimely demise of Collarwali created a gap for conservationists, wildlife enthusiasts, tourists, and local government officials, who took care of her very often because she was the most seen and celebrated face of Pench National park. Just a glance at her, and one would know the phrase, “creation of God”; her humungous body with a royal walk mesmerized an endless number of people throughout her lifetime.

Collarwali was called “Collarwali” because she was befitted with a mic band in her collar, so she can be tracked for purposes of immediate medical attention. Meanwhile, talking about her legacy, she gave birth to 29 cubs in her lifetime which is a significant number of births by a tigress around the world. She was the 15th tigress of Pench National Park, that’s why she is called Collarwali: T-15. India accommodates more than 70% of tiger reserves in the world, where the number of tiger reserves has increased rapidly, as a result of the proliferation in the number of tigers as well, and Mataram is given huge credit for doing so by giving birth to 29 cubs. Mataram is another name given by native people, because it meant, “respected mother”. 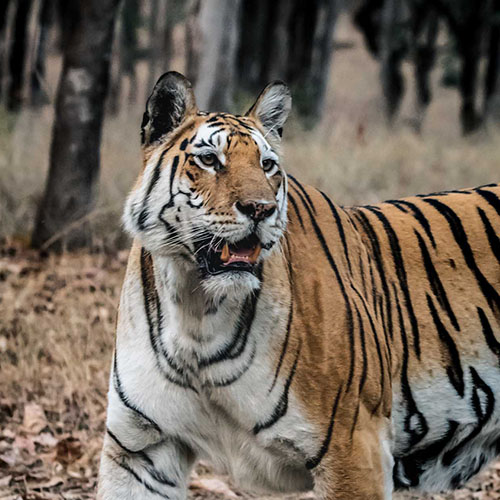 Forest officials were very fond of Collarwali because she was the most spotted tigress in the park and we came to know of a very interesting fact that she was neither afraid of visitors as well. Many conservationists say that Collarwali was the “Face of Pench” because of her friendly glance with visitors, she was very comfortable with photographers and conservationists documenting her and her cubs.

We see that once the cub is born to the mother tigress keeps the baby cubs with her until they know how to hunt on prey, but sources at the national park said that she used to drop off the cubs into various regions abundant with prey and that too very soon after the birth so they can be self-dependent. Also, she was a very strong mother because initially, she was so big that many a time people misunderstood her as a male secondly, she sometimes used to hunt twice a day.

There are also some stories told by native government officials about Collarwali that once she and her 3 cubs went hunting after a Leopard up to the hill and it was an intense chase we could see from a distance with our gypsy parked away from the crime scene. She was intelligent as well, as whenever she wanted the officials and vets to come and check her, she would come outside of her boundary onto the open area where they could reach her quickly. The same happened one day before she died of old age, but they couldn’t save her. She was cremated with proper customs and traditions, in the presence of thousands of villagers, officials, conservationists, journalists, and photographers. They were sad but also content that Collarwali led a complete life and inscribed values into their lives as well. She will always be remembered with pride and honour.